Best Germany VPN in 2023 to Get a German IP Address

In recent years, Virtual Private Network or VPN use has increased in popularity in Germany. This is due to several reasons. Firstly, data retention laws have changed multiple times, with Internet Service Providers (ISPs) required to store customer data for 10 weeks, according to a law passed in 2015. Secondly, Germany collaborates with the Five Eyes, an intelligence alliance in which global nations share citizens’ data for security purposes.

With German citizens and residents feeling less secure when it comes to online privacy, it’s no surprise that sales of VPNs have sharply risen in the past couple of years. As more individuals become aware of the benefits a VPN offers, it’s important that users buy the best VPNs.

Whether you live in Germany or travel there often for work or leisure, it’s a good idea to make use of a VPN. Not only will you have better peace of mind knowing that your internet data is private, but you’ll be able to access geo-restricted content. Likewise, if you live outside of Germany but are a fan of German TV shows, a VPN will allow you to watch German versions of your favorite streaming services. Show more

Other VPNs We Recommend

The Best VPNs for Germany

We’ve researched several VPN providers to see how their services fare for German-based customers. From server access to extra features, here are our best VPNs for Germany.

If you want access to a German IP address then NordVPN can provide you with that. It is one of the best providers if you’re looking for a Germany VPN, as it has hundreds of servers in 2 VPN server locations. If you want to use streaming sites outside of Germany, then the pick of server location choices will offer you endless options.

For a speedy VPN connection, NordVPN won’t disappoint. Thanks to its high-end technology that includes the NordLynx protocol, users can enjoy fast speeds while browsing the web. As well as this, NordVPN offers superior protection in the form of AES-256 bit encryption and Double VPN. The latter connects individuals to two servers, essentially encrypting their data twice.

On top of offering incredible VPN services, customers can rest assured that their privacy will never be compromised. Nord keeps no logs of user data so you can browse the web and visit every website you want to without fear that your online activity is being stored.

Compatible with all major operating systems, and with dedicated apps for PC, Mac, iPhone, and Android, Nord offers one of the best VPN products for Germany. You can try it risk-free for 30 days, thanks to the 30-day money-back guarantee policy.

With 4 VPN servers in Germany, there is the opportunity for users to access many German IP addresses with ExpressVPN.

Although ExpressVPN only has 4 servers in Germany, with 3 of these in Frankfurt alone, it tops our list due to the amazing features it provides to users. With a vast array of server locations around the world, this provider is perfect for people who want to bypass geo-blocks and enjoy foreign content.

Not only is ExpressVPN perfect for internet users who want more freedom online, but it will give them security while they are navigating the net. ExpressVPN uses encryption that is extremely difficult to decipher and has Perfect Forward Secrecy. This means that encryption keys are changed during each VPN session, ensuring that the keys don’t become compromised, allowing hackers to access your data.

ExpressVPN is one of the fastest VPN providers, so you are guaranteed a fast VPN connection making this provider great for buffer and lag-free streaming and gaming. There is also unlimited bandwidth with ExpressVPN, great for users who like to torrent. With a German language option available for Germany-based customers and great customer support, ExpressVPN is user-friendly, easy to use, and extremely reliable. 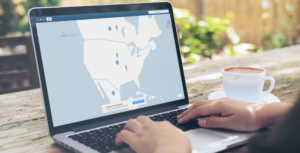 Surfshark is cheap, fast, and has a great privacy policy so your online activity will never be revealed.

Great speeds are not the only appealing aspect of Surfshark. The provider has a large server network, so whether you’re searching for a VPN server in Germany or elsewhere, you’ll be able to find something that suits your needs.

Privacy is key when it comes to VPNs, and Surfshark doesn’t disappoint in this area. There is military-grade encryption, DNS and WebRTC leak protection, in-built ad-blocking, and a kill switch. What’s more, there are unlimited simultaneous connections, so you can protect all of your devices at once. Surfshark has dedicated apps for Windows PC, macOS, iOS, and Android.

Price is without a doubt one of the best aspects of Surfshark, and the 2-year plan costs less than $3 per month. You can try out the VPN for 30 days without signing up thanks to the risk-free 30-day money-back guarantee.

Security comes first with ProtonVPN, a trustworthy provider that offers a free VPN service alongside its paid-for options.

If you want to access a server in Germany, then you’ll be able to with ProtonVPN. The provider’s choice of server location means that every internet user can access a German or foreign IP address depending on their needs.

ProtonVPN has four VPN plans, with each plan offering users more features. Although all customers will have access to first-rate encryption, a kill switch, and secure protocols, extra features increase depending on how much you pay. On the Plus plan, there is access to Proton’s secure servers which connect individuals to one of its own servers in Switzerland and another. As well as this, customers who pay a little more can enjoy P2P networking and torrenting.

One thing we like about ProtonVPN is its free VPN. Free VPNs are generally a little less advanced in terms of the features they offer, and we would advise caution if you use a free VPN. Unfortunately, Proton’s free VPN doesn’t connect people to a Germany VPN server, making it ineffective if you’re looking for a German IP address.

ProtonVPN has a strict no-logging policy and its headquarter location is in Switzerland. There is sufficient customer support and users can access a knowledge hub via Proton’s website, or contact customer service via email. With apps for PC, Mac, iPhone, and Android customers, Proton makes using a VPN easy and possible from almost every device.

IPVanish’s network of servers is secured with AES-256 encryption, making it one of the safest VPNs to use.

One of the best Germany VPN providers is IPVanish. You can easily access a German server thanks to its large network. What’s more, you can use IPVanish on all of your devices thanks to its dedicated apps, and access geo-blocked content from your phone or PC.

IPVanish offers customers many protocols including OpenVPN, L2TP, and IKEv2, and has industry-standard encryption for extra secure browsing. There is also DNS-leak protection and a kill switch across all of its apps.

The tight no-logging policy can be found on IPVanish’s website and assures customers that their data will never be stored. With IPVanish, people can enjoy P2P networking, and there is even a split tunneling option for those who only want to encrypt data on certain apps or websites.

Although IPVanish doesn’t offer the most competitive prices on our list, it has a money-back guarantee that lasts for 30 days, so people can test the VPN out and decide if it is right for them or not.

Why Do I Need a VPN for Germany?

From security and privacy to internet freedom, there are several reasons why you need access to a VPN service for Germany.

Protect your privacy: Germany has some controversial data retention laws. Telecommunications providers (which includes ISPs), must store user data and have to hand it over to authorities when requested. Due to increased terrorism within Germany and across Europe, internet surveillance has been stepped up, which means all citizens are being watched.

With a VPN, you can ensure your internet data goes through an encrypted tunnel, that no one, not even your ISP, can see. As well as this, most VPN providers don’t keep data logs (although there are a few exceptions!) which means you can surf the net without worrying about the repercussions.

What’s more, websites across the internet store our device’s IP address, and German IP addresses are no exception. This can lead to advertisers and third parties collecting information on you and exploiting it. VPN usage is legal in Germany and can protect you from all of the above.

Protection from hackers: A VPN offers general protection from hackers, regardless of what territory you live in. Hackers are constantly trying to access weak networks, such as shared wi-fi networks in restaurants and coffee shops. They do this to steal sensitive information such as bank details and passwords, and this is a lot more common than you may believe. VPNs with strong encryption make it harder for spies to decipher your data and ultimately steal your identity.

Bypass regional blocks: For some people, privacy is the least of their worries, and they simply want a VPN to access content from around the world. If you’re in Germany but want to watch US Netflix (or vice-versa), you’ll need a VPN. Netflix is notorious for its VPN blocking firewall, but there are many great providers that use obfuscated servers to get around these blocks.

What’s more, a VPN is essential for the modern-day traveler. Whether you travel for work or for fun, you’ll want to access content in your home country, wherever that may be. When it comes to Germany, VPN providers are aware of the need for VPN services, and so have many servers located there.

What Should I Look for in a VPN for Germany?

The reasons for getting a VPN in Germany are clear. So, what should you look for in a German VPN provider?

Do All VPNs Offer German Servers?

German servers aren’t a given on every single VPN service’s network, but most do offer at least one. If you want to get a VPN that has German servers then choose one from our list above or check out our best Europe VPN page.

A VPN for Germany is a great idea if you need access to a German IP address for work or leisure. However, be careful if using a free VPN or a P2P network to get a German IP since these can come with risks.

How Do I Get a German IP address?

To get a German IP address you need to download a VPN from the list above, visit the VPN server list, and connect to a server in Germany!

Is VPN Legal in Germany?

Yes, VPNs are legal in Germany. What isn't legal, is using VPNs to carry out a crime or illicit activities.

To access German internet, you need to get a local German IP address, which most VPNs offer. Once you have done this, you can watch German Netflix and access local news websites more easily.