Twitch is the biggest live-streaming platform globally, hosting over 91% of all video game streaming and boasting over 15 million active users every day. Owned by Amazon, it’s no surprise that the platform has gained rapidly in popularity since its launch in 2011.

Unfortunately, not everybody in the world can enjoy unlimited access to Twitch, with some countries, such as China, implementing a nationwide ban on the platform. This, alongside several other reasons, is exactly why many users need a VPN for Twitch.

With so many VPN providers on the market, users face a difficult choice when deciding where to spend their money. That’s exactly why we have created this helpful guide. Below, you will find plenty of useful advice and guidance about VPNs for Twitch, why you may need one, and which are the best options. Keep reading to find out more. Show more

The Best VPN for Twitch

The tests are done, and the numbers are in. We have our finalists. Below, we have outlined the very best VPN service providers on the market that provide unrestricted access to Twitch. We won’t keep you waiting any longer; keep reading to check out the shortlist.

NordVPN is a well-established VPN provider with more than enough power to handle any streaming service, including Twitch and Twitch Prime. Fast speeds and stable connections come as standard, as well as the following perks:

If you need a new IP address to access Twitch and gaming content, look no further than NordVPN. It’s powerful, fast, and users can connect in just one click. Its user-friendly platform and apps mean that anyone can use it. Whether you use IOS, Android, Windows, or Linux isn’t a problem, as NordVPN works seamlessly across all devices.

NordVPN puts user privacy at the forefront of their service, and a strict no-logs policy is evidence of this. They do not store any of your browsing data or IP address, so you can bypass content restrictions without having to compromise your personal privacy. Users can enjoy Twitch and other streaming services like Prime Video and YouTube without lagging or data caps, thanks to NordVPN’s unlimited bandwidth.

All of this is available for $11.95 per month. A 6-month subscription costs just $9 per month, and a 2-year plan is just $3.71. A 3o-day money-back guarantee protects every purchase so that you can try the service risk-free for the first month.

IPVanish is well respected in the gaming community for being a powerful VPN to play and stream Twitch. With over 40,000 IP addresses across the network, it’s easy to stay undetected with IPVanish. Here are some of the main perks:

IPVanish is the perfect solution if you watch Twitch from several devices. Not only does it support most operating systems, but you can actually have an unlimited amount of simultaneous connections on the same account. Each connection is completely secure, backed up by its 256-bit encryption and larger-than-average choice of security protocols.

Other notable security and privacy features include a kill switch and a strict no-logs policy. This means that no browsing data is stored, including any IP addresses. This is a much better level of security than what is provided by a standard ISP.

You can subscribe to IPVanish for $3.49 in the first month, followed by $10.99 per month. For the best value, a yearly membership is just $34.99 in the first year, followed by $99.99 per year afterward. There is a 30-day risk-free period, but this only applies to annual plans.

When it comes to using a VPN for streaming services, including Twitch, it’s hard to look past ExpressVPN. This is because ExpressVPN has some of the fastest network speeds in the world, with no data restrictions. Here are some other highlights:

ExpressVPN isn’t just the perfect VPN for Twitch but also works perfectly with other streaming services like Amazon Prime and Netflix. Its super-fast speeds and reliable connections are seriously impressive, and ExpressVPN sported an average speed of 135mbps during testing. This can support even the highest definition streams for hours on end.

There is also plenty of advanced privacy and security tools in place. A kill switch will cut your internet if the VPN connection drops so that your ISP or the website you are on doesn’t know you’re using a VPN. Split tunneling also allows you to select specific apps to bypass the VPN, meaning you can access local services while watching a stream in a different location.

A subscription to ExpressVPN costs $12.95 per month, or $9.99 per month if you sign up for 6 months. A 30-day money-back guarantee protects each purchase, so there’s plenty of time to change your mind.

CyberGhost VPN is popular amongst gamers, with many using it to access Twitch. It has some of the strongest security features, perfect for hiding your identity and keeping it hidden. You can connect to a server from almost anywhere in the world and also enjoy these features:

We always recommend that you use a VPN designed for what you need it for, which is why CyberGhost deserves a spot on this list. CyberGhost was made for gaming and Twitch streaming, with powerful servers dedicated to supporting streams. You can also enjoy music broadcasts, Netflix and Prime Video without interruption. The average speed during testing was 58mbps, but in ideal circumstances, the servers can achieve up to 1GB.

Not only can you access Twitch and watch your favorite video games, but you can do so in a completely secure environment. Unlike many other VPN products, CyberGhost provides a completely dedicated IP address for each connection. This bypasses restrictions and IP bans, as well as provides an extra layer of privacy for users.

Subscribing to the CyberGhost VPN services costs $12.99 per month, or $7.99 when you commit 6 months. You can connect from a server almost anywhere in the world and get over one month to decide with a 45-day money-back guarantee.

Reasons to Use a VPN for Twitch

A Virtual Private Network, or VPN for Twitch, is used for several reasons. 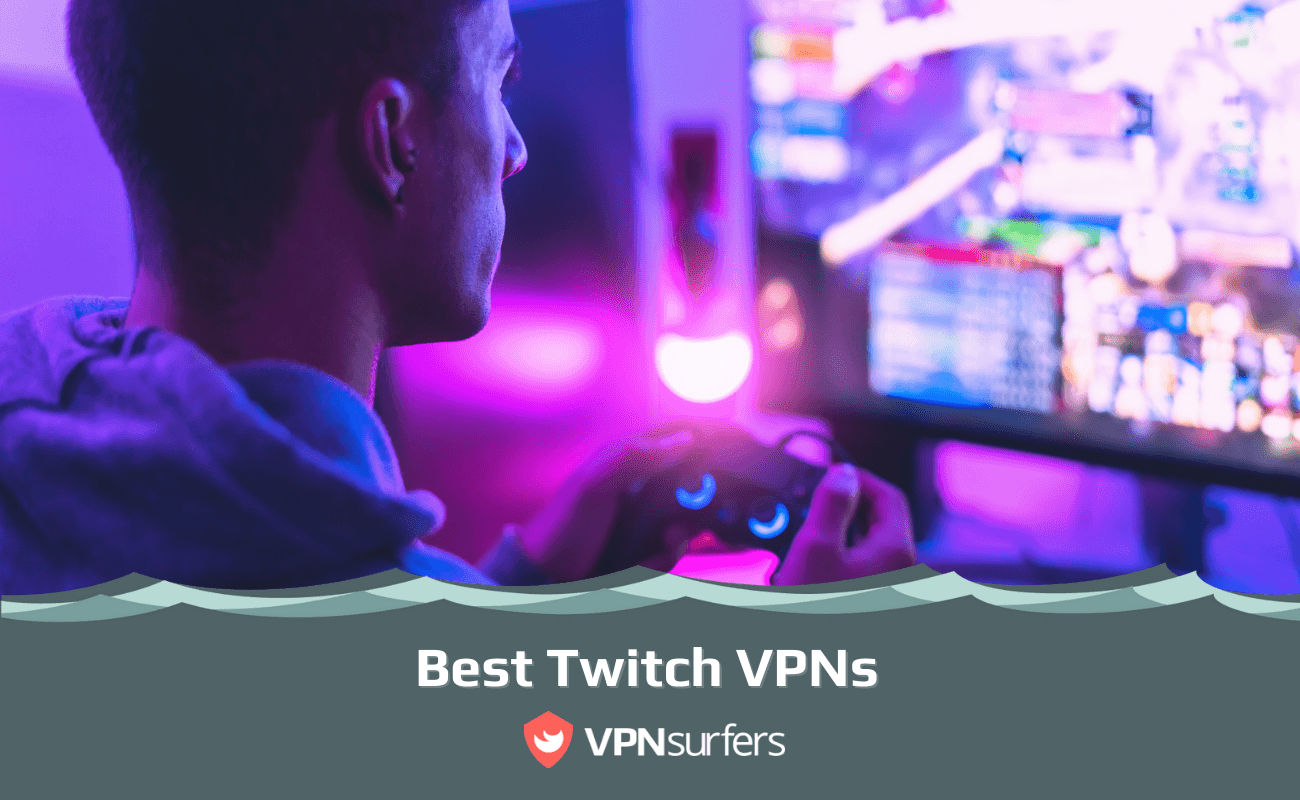 How We Review Twitch VPNs

Any good VPN service will provide several tools and features as standard, but not all of them support HD streaming or reliable access to Twitch. This takes plenty of bandwidth and a powerful server network, mostly exclusive to the very best VPNs on the market. Because of this, we conduct thorough reviews and put each VPN provider to the test. Here are some of the specifics that we look for in the best VPNs for Twitch:

Is Using a VPN for Twitch Allowed?

Although Twitch won’t necessarily ban your IP address if you’re detected as using a VPN, there are some consequences. It’s widely reported that a shadow ban is applied, so people on VPNs cannot participate in the live chat functionality in the sidebar. The difficulty with a shadow ban is that you won’t even know it’s happening, so it’s best to avoid detection when watching Twitch streams completely.

Will Using a VPN Slow Down My Network Connection?

No, in fact, the VPNs listed on this page are known for improving the speed of your ISP connection and can help if Twitch keeps buffering. This means that you can enjoy Twitch, Amazon Prime, Netflix, and other content without any speed issues or lag. The VPNs in our top list are tried and tested for streaming.

Is There a Catch With a Money-Back Guarantee?

Every streaming VPN service listed on this page provides a 30 to a 45-day money-back guarantee, and there is no catch involved. You can enjoy unlimited access to all of the VPN features and test them with your ISP before deciding to commit long-term. If you’re not 100% happy with the service, you can claim a no-hassle refund within the specified time period.

With a Twitch VPN, you can overcome IP blocks and hide your online activity from third parties. If you're an avid streamer, then a VPN is definitely something you need to use!

Can I use a VPN with Twitch?

Yes, you can use a VPN with Twitch if you want to change your geo-location or hide your activity on the platform from third parties.

Do most Twitch streamers use a VPN?

Most hardcore streamers use a VPN, simply for the privacy protection, it gives them. As well as this, streamers may use it to change their virtual location so that they can connect with international fans on different platforms.

What free VPN for Twitch is the best?

Due to the fact that using Twitch requires a lot of bandwidth, we recommend ProtonVPN as a free Twitch VPN option. However, for the most reliable experience it is best to opt for a premium Twitch VPN.