The Korean Peninsula, known as Korea, is divided into two parts, North and South, and both have different internet laws and freedoms. Although tourism to South Korea is more popular, many more people are starting to visit the North.

Investing in a Korea VPN that you can use in both North and South Korea is vital if you’re visiting the region. However, you can use a Korea VPN outside of the peninsula if you want to access South Korean websites unavailable in other countries.

Read on to find out more information about Korean VPNs and check out the list of the best VPN providers for Korea in 2023! Show more

Here are the best Korean VPN providers. We’ve judged each provider based on our VPN assessment criteria, including pricing, security features, server locations, and device support.

If you want to use a VPN in South Korea, North Korea, or anywhere else, NordVPN is a good option due to its impressive server network and renowned global reputation.

NordVPN is a close second on our list of VPNs for Korea, simply due to its first-class privacy and security features. Alongside advanced encryption, you can create a secure connection with NordLynx, the provider’s own protocol.

IPv6, DNS, and WebRTC leak protection protect IP addresses or DNS request leaks that could reveal your identity. NordVPN also protects user privacy through its no-logs policy. Your web traffic and data won’t be written to the provider’s servers, meaning your activity in and outside of Korea won’t be seen by your ISP or the government.

NordVPN can unblock many streaming sites in South Korea, which is great news for South Korean TV and film fans. If you’re in Korea and want to watch Western content, then you can since NordVPN unblocks Netflix and other popular streaming services across the world.

With 6 simultaneous connections per plan, you can enjoy NordVPN’s dedicated apps on most operating systems like Windows, macOS, iOS, and Android. You can use the VPN on your router; however, you’ll need to manually set up the VPN connection, which is a difficult process.

NordVPN doesn’t have servers in North Korea, but it is still a good option for the restrictive region. Test out the VPN service for 30 days; if you don’t like it, you can get a full refund.

Surfshark made a big splash when it launched and has become a firm favorite of many users due to its incredible services, making it an obvious choice for a Korean VPN.

You can get a South Korea IP address or choose from IP addresses in 64 other countries with Surfshark. The provider has great unblocking capabilities, which allows you to browse the internet freely regardless of your physical location.

There is good news for US internet users who want to watch Korean TV channels outside South Korea, as Surfshark can provide access to TV networks like KBS. Likewise, residents in Korea can access foreign content on US Netflix, Amazon Prime Video, and the UK’s BBC iPlayer.

Privacy and security features include AES-256 bit encryption, private DNS on all servers, and a kill switch. The kill switch is effective and will cut off your internet connection should your VPN connection drops. All of these features are great for internet users who use public wi-fi networks in Korea.

Surfshark is a no-logs VPN provider and has had its privacy policy independently audited. Everyone who uses the VPN service can rest assured that their data won’t be stored on the provider’s network.

With every Surfshark plan, there are unlimited simultaneous connections, meaning you can use it on all your devices simultaneously. Surfshark offers dedicated VPN apps for all popular operating systems, including Android TV, Apple TV, and Amazon Fire TV.

Customer support is excellent, and there is a 24/7 chat on the Surfshark website and a help section full of relevant VPN information and an email address. Unfortunately, there is no free trial. However, you can enjoy Surfshark for 30 days with no risks, thanks to the provider’s month-long money-back guarantee.

ExpressVPN is one of the fastest VPNs on the market and helps users bypass restrictions in Korea and other parts of the world.

If you want a high-speed internet connection that is also extremely secure, ExpressVPN is the obvious choice. The provider’s proprietary Lightway protocol is an improvement upon WireGuard and will give you both speed and security, perfect for a VPN in South Korea or anywhere else.

In terms of bypassing restrictions and accessing websites in other countries, ExpressVPN is excellent. Not only can it unblock streaming service libraries like Netflix, Amazon Prime Video, and Hulu, but it can provide access to restricted social media sites and blocked news websites. Whether you’re in North or South Korea, you can enjoy unlimited internet freedom with ExpressVPN.

One downside to ExpressVPN is that it only protects 5 devices at any time; this means that you can’t share your subscription with family members or friends and may not be able to simultaneously protect all of your devices.

ExpressVPN redeems itself from the fact it offers a low number of device connections thanks to its VPN apps, which include a router app. You can use ExpressVPN on your router, bypassing the device limit, and easily change the router VPN settings with the app.

ExpressVPN is slightly more expensive than other providers on this list, with its lowest monthly price of around $6. However, it is worth the money and comes with a 30-day money-back guarantee for all new customers.

CyberGhost has recently updated its server network to gives its customers more access to online content than ever before, making it perfect for a South Korea VPN.

CyberGhost VPN is similar to many of the other providers in this list; it employs advanced encryption, first-rate protocols, and has a strict zero-logs policy. So what sets it apart from the other South Korea VPN services?

Firstly, CyberGhost has a vast VPN server network, providing access to many IPs. It has server locations in almost 100 countries, including South Korea, making it a great option for bypassing geo-blocks. You can access almost any website with CyberGhost, including Korean TV networks and US streaming service libraries.

There is unlimited bandwidth and no data caps with CyberGhost, making CyberGhost a great option for streaming and torrenting. Torrenting is permitted on all servers, which is great if you want to download films and TV shows in South Korea.

CyberGhost customers can use the VPN on up to 7 devices simultaneously and enjoy a 45-day money-back guarantee. The subscription plans are reasonably priced, especially the longer-term plans, but the monthly plan is rather expensive at $12.99, even more than ExpressVPN charges.

Why Do I Need a VPN for Korea?

Using a VPN is important, regardless of the country you live in. However, there are some specific reasons why buying a Korea VPN is a good idea.

A Korea VPN gives you privacy online and hides your identity.

With a Korea VPN, you can subvert geo-blocks. 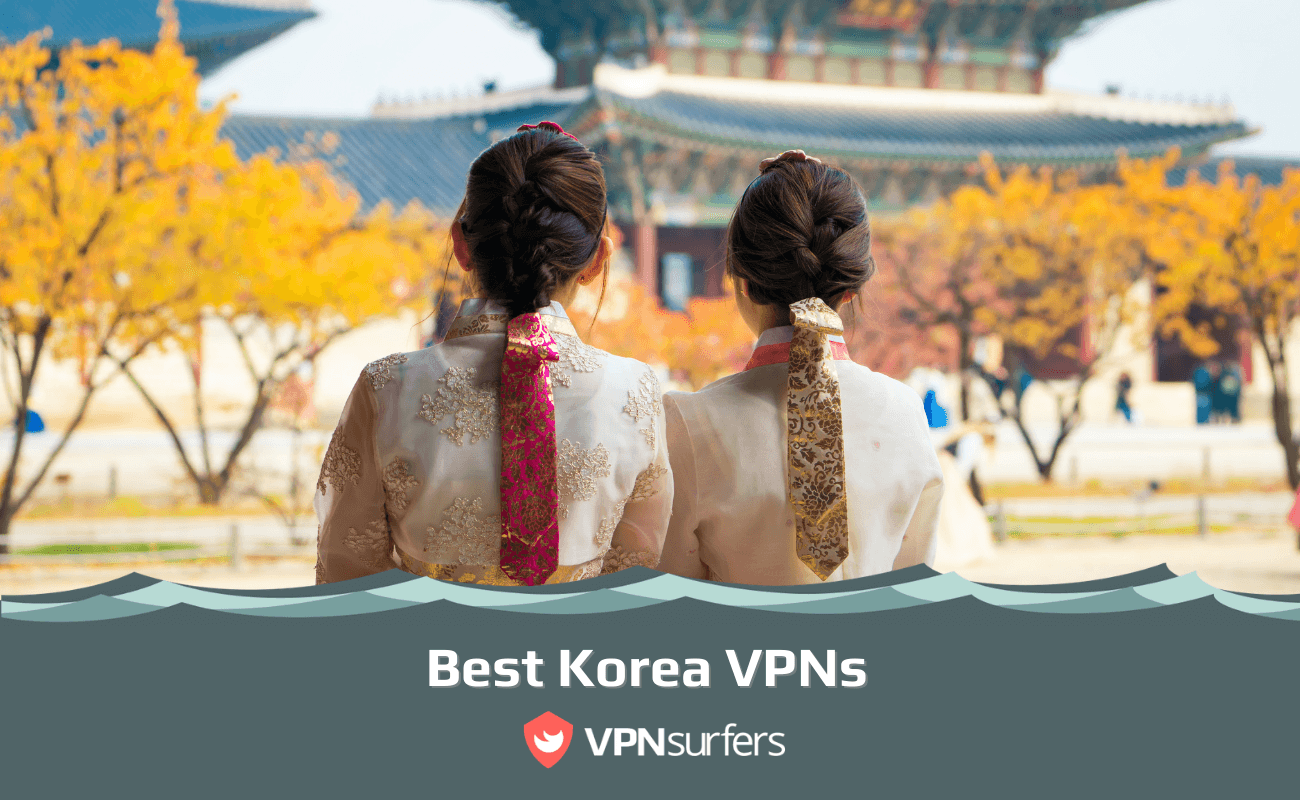 How Can I Get a South Korean IP Address?

Getting a South Korea IP address is easy! Purchase a VPN service from the selection above, download it onto your app, and connect to a South Korea VPN server location. Then you’ll have an IP address from the country, making it seem as though you’re in South Korea.

Is VPN Illegal in South Korea?

You can use a VPN in South Korea as they are 100% legal. However, you must follow South Korea’s internet laws while using a VPN.

Can You Use a VPN in North Korea?

VPNs are banned in North Korea. The country imposes strict censorship, which restricts what visitors and residents can see online.

Does a Korea VPN Work in North and South Korea?

All of the VPNs above are functional Asia VPN services, that work in many Asian countries including South Korea. While we have not been able to test a VPN service in North Korea, the providers above also assure users that their services will work in the country.

A Korean VPN can provide users living on the peninsula with advanced privacy online. It also allows international users to get a Korean IP address from anywhere in the world to access Korean content.

Is There a Free Korean VPN?

Yes, there are some free VPNs that offer Korean servers. However, we don't recommend using these because they log user data, impose data limits, and offer fewer features.

Which VPN has North Korean servers?

Not many VPNs offer North Korean servers. However, HideMyAss! is one popular provider that provides users with access to servers in North Korea.

Can I use a VPN to watch K-Dramas?

A VPN is a great way to watch K-Dramas from the US and other parts of the world. With a Korean IP address, you can get early access to new releases on South Korean television networks.