League of Legends was released in 2009 by Riot Games and since then has gone on to be one of the biggest team-based strategy games in the world. League of Legends, known by most as simply League, is truly one-of-a-kind with millions of active players worldwide.

Like all great things, League also comes with its flaws. The biggest frustration for players is geo-restrictions which block content in certain parts of the world, closely followed by the poor connection speeds sometimes found during peak playing times.

The great news is that a League of Legends VPN can solve most of these issues and significantly improve your gaming experience. We look at the best VPNs for League in this guide, including the features, usability, and price. Keep reading to find out everything you need to know. Show more

VPNs We Recommend for Gaming

The Best VPNs for League of Legends

Now that we have explained why you should use a VPN for League and what a good VPN looks like, it’s time to get to the important details. Below, you will find a list of the very best VPNs for playing Leagues of Legends.

NordVPN is one of the most versatile VPNs on the market. Not only is it a great gaming VPN for playing League of Legends, but also a fantastic option for everyday use, packed with premium features. Here are some of the highlights:

NordVPN also sports some of the fastest connection speeds, guaranteed to reduce your ping. As well as a stable and reliable connection, you are completely protected by NordVPN’s powerful privacy and safety tools.

A kill switch will temporarily end your internet connection if the VPN drops, so League of Legends and Riot Gaming will never know your real IP address or that you were even using a VPN.

The no-logs policy also means that NordVPN does not store any of your browsing data. This is the ultimate way to game, stream, and browse without worrying about DDoS attacks or hacking attempts.

Subscribing to NordVPN costs $11.95 per month, which can be reduced to just $9 per month when committing to 6 months. A 30-day money-back guarantee is provided as standard.

ExpressVPN tops the charts whenever it comes to connection speeds. There aren’t many other VPN servers that can achieve what the ExpressVPN network can. Just some of the main perks include:

ExpressVPN is best known for its seriously impressive speeds and powerful servers that can handle almost anything. This is exactly what makes it a great VPN for League, as you will never have to worry about lag or disconnections. There are no bandwidth caps or limitations, making ExpressVPN the ideal gaming VPN.

Up to 5 devices can connect to the servers using the same account, meaning that the whole family can access these features for one affordable price. Private DNS is provided for every connection, and you are protected in case of hacking or phishing attempts, a common problem in the world of online gaming.

CyberGhost is a fantastic VPN for League of Legends. Not only does it have the largest server network of all VPNs, but it’s designed with gamers in mind. CyberGhost perfectly combines privacy and security with premium performance. Here are some of the highlights:

CyberGhost is one of the few VPNs that was developed for the gaming experience. Using a VPN made for gaming comes with many specific benefits, as CyberGhost hasn’t missed a single detail.

As well as the biggest selection of server locations for players to choose from across over 90 countries, the network can handle almost anything. You can play League of Legends, stream your favorite content and browse your favorite sites completely undetected with this powerful VPN tool.

No cookies are stored, or browsing history is saved thanks to the strict no-logs policy at CyberGhost. Players don’t need to worry about data leaks during gameplay, and CyberGhost can also protect users from DDoS attacks and DNS leaks. There are many features not available with your standard ISP, so using a VPN is the easiest way to get the best gaming experience.

A subscription to CyberGhost VPN costs $12.99 per month or just $7.99 for 6 months. You can enjoy a 7-day free trial with absolutely no limitations. This gives you the chance to test the network and servers on League of Legends before committing.

Surfshark is one of the best all-around VPN products in the world. Ideal at home, work, school, or on the go, its powerful sever speeds can support an unlimited number of simultaneous connections. Other features include:

Surfshark has a stellar reputation in the VPN market, thanks to its great features, responsive customer service, and millions of satisfied users. Not only is Surfshark perfect for playing League of Legends, but it can also be shared with fellow gamer friends or family.

Surfshark is one of the very few VPNs that supports unlimited connections on the same subscription. An unlimited number of users, no data caps, and reliable gameplay are just some of the reasons why Surfshark made the shortlist.

Safety is the most important aspect of any VPN. Not every product can achieve complete anonymity for users, but Surfshark can, thanks to its 256-bit AES encryption and Camouflage Mode. This means that your VPN usage will never be detected while on the League of Legends network, preventing any IP bans or account closures.

Another thing that sets Surfshark aside from the competition is how easy it is to use. The one-click connection takes just seconds on all devices.

A subscription with Surfshark costs just $12.95 per month, but savings are possible when you commit to a longer term. A 6-month subscription is $6.49 per month, and 24-months is as little as $2.49. All of these options include a 30-day money-back guarantee.

Hotspot Shield has some of the fastest servers in the world, ideal for playing League of Legends. Its best-in-class privacy tools mean that masking your IP address and overcoming geo-restrictions couldn’t be easier. Here are some of the main perks of this VPN for League:

Hotspot Shield is one of the only VPNs that has developed a VPN protocol of its own. This provides the ultimate protection while connected to the server network, solving many of the problems faced by gamers when playing online. This level of security combats data leaks, DDoS attacks, and other common issues that can interrupt gameplay.

None of your browsing data or IP addresses are saved by Hotspot Shield, thanks to a strict no-logs policy. This is also backed up by a kill switch, which will ensure that your connection is never left unprotected.

Hotspot Shield is available for free in a minimal capacity. If you wish to subscribe, you can choose from the Premium ($7.99 per month) or Family ($11.99 per month) packages. The key difference being the number of devices that can connect to the servers simultaneously.

Why Use a VPN to Play League of Legends?

There are many benefits to using a gaming VPN, and many of them significantly improve the League of Legends experience.

VPN servers have advanced security and privacy tools, including DNS leak protection, dedicated IP addresses, and much more. Playing with a VPN is the safest and most secure way to connect to game servers, protecting your privacy and data. 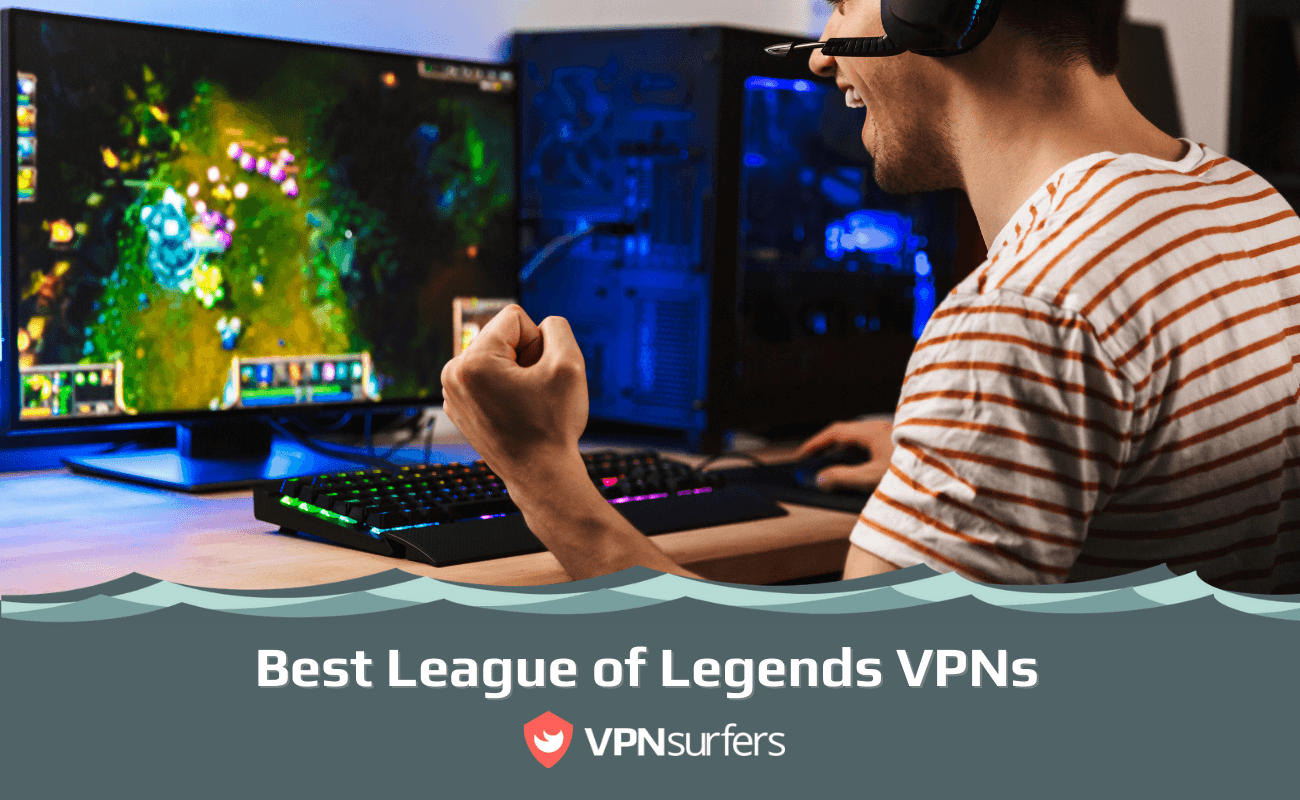 Does League of Legends Allow VPNs?

Using a VPN to play League of Legends is frowned upon, but it doesn’t break any laws. That said, it’s still best to remain undetected. If Riot Games discovers you’re using a VPN for League, you risk having your IP banned or having your gaming account shut down. This is why using a quality VPN is important, as the high level of security will allow you to fly under the radar at all times.

Can I Use Free VPNs on League of Legends?

While there are free VPNs out there, they tend to come with a large number of restrictions. This usually means limited bandwidth and speeds, extremely frustrating if you’re trying to game.

We would love to give players suggestions of powerful VPNs that don’t cost a penny, but unfortunately, they don’t exist. Free VPNs are best for general internet access and casual browsing, whereas you will need something more premium with better servers for League of Legends.

Will My ISP Know That I Am Using a VPN?

Although Internet Service Providers (ISP) have gotten smarter over the years when it comes to VPN detection, so have the VPNs themselves.

Most of the products listed on this page have double layers of protection so that nobody, not even your ISP, can detect that you are using a VPN. This is done through private DNS, kill switches, split tunneling, and many other premium features. But remember that these are not available with most free VPNs.

Can I Use the VPN for Another Game?

Yes, all of the VPNs suggested for League of Legends are also compatible with any other game of your choice. Whether you want to play LoL, Minecraft, WoW, or anything else, you can enjoy the same fantastic perks across all.

As well as gaming, the servers are great for secure internet access for all purposes, including business and general browsing activities. It’s recommended that you stay connected to your VPN regardless of activity.

Yes, many of the VPNs listed on this page allow for simultaneous connections across multiple devices. We recommend only allowing access to close friends and family, though, as you will need to share your login details and personal information.

How We Assess VPNs for League of Legends

VPNs are powerful tools, but the best VPN product for everyday browsing isn’t necessarily going to be the best VPN for playing League of Legends. This is why we have a specific set of criteria when assessing a VPN for League.

Each of the VPNs on this page has been tried and tested on League of Legends and has passed our assessment criteria with flying colors. Here is a brief outline of what aspects we look at before compiling a list of the best VPNs for League:

A VPN for League of Legends is a great asset. It can help you change your IP address, play the game from anywhere in the world, and stay safe whilst playing. However, make sure to use a premium VPN with LoL to ensure you can enjoy a secure and reliable gaming experience.

Will a VPN affect gaming speed?

A VPN can positively, or negatively, impact speed when gaming. In most cases, a VPN is a beneficial addition since it can stop bandwidth throttling and increase ping. Make sure you choose a premium VPN to avoid your speed being drastically slowed down.

Can I use a VPN to play LoL at school?

Yes, a VPN should help overcome blocks on certain networks such as your school campus or at work. This is because the VPN hides your data and changes your IP, allowing you to game in private.

Can I play League of Legends with a VPN?

Of course! Using a VPN for LoL provides tons of great benefits too. However, be careful when using a VPN for LoL since Riot Games imposes security measures to prevent hacking and keep its users safe which could result in your getting blocked!