If you’ve searched for a subscription online, then you may have heard of lifetime VPN deals. While these were once a popular option for consumers, it is hard to find a top provider that offers one.

We’ve taken an in-depth look at lifetime VPNs as well as reasons why you should avoid using one. Keep reading to find out everything you need to know about lifetime VPNs and why they aren’t worth purchasing. Show more

Do the Best VPN Providers Offer a Lifetime VPN?

Although NordVPN did have a lifetime service, it has pulled this offer from its website. Instead, it offers some of the best deals that give users access to all of its impressive features.

Which VPN Deals Are Better Than a Lifetime VPN?

If you need a long-term subscription, we suggest you look at the reputable providers listed below. While there is no lifetime VPN service on offer, each one offers at least a year-long plan, allowing users to get a better deal and use the VPN for a lengthier amount of time.

Our top VPN pick is NordVPN. This good service offers advanced features, a vast network of servers, spanning 59 countries across the world.

NordVPN has a two-year plan that is fairly priced and is a great alternative to a lifelong subscription. Its services go on sale from time to time, which means you might be able to purchase a 15-month subscription for even less.

With one NordVPN subscription, you get six simultaneous connections and ensure that you always have a secure internet connection. NordVPN works with the most popular operating systems, which means you can protect your data when using public wi-fi networks.

NordVPN offers plans of various lengths. Each plan comes with 24/7 customer support including live chat support and a risk-free 30-day refund policy that lets you try out the services on offer for the first month without signing up for a plan.

Another reputable service is ExpressVPN. In exchange for a higher price, users get one of the best VPN services on the current market.

ExpressVPN is expensive but provides an incredibly secure and reliable connection. Its security features are first-rate, as it has AES-256 bit encryption on all of its servers and a zero-log policy that is foolproof and will ensure your sensitive data is always private.

It has extra features on offer, including an automatic kill switch that protects your internet data if the VPN connection drops and gives you online protection on public wi-fi networks.

For a super-fast connection speed, ExpressVPN is the best choice. It is one of the fastest VPN options, performing well in ping tests with unparalleled speeds thanks to its Lightway protocol, and is one of the best VPNs for use on streaming services and gaming. Moreover, it can bypass regional blocks on its multiple servers and help you stream content on streaming libraries such as Netflix and BBC iPlayer.

Although you can only use the VPN on up to five devices, users can connect the VPN to their router and get around this limit. ExpressVPN has proprietary apps for the most popular operating systems and can even be configured to your Amazon Fire TV or Smart TV to help you make the most out of your online experience.

Included in the price is access to over 3000 servers and good customer service that operates 24/7. There is also a 30-day refund policy for new subscribers that acts as a free trial.

What is a Lifetime VPN?

A lifetime VPN subscription is exactly what it sounds like. Users get an unlimited lifetime subscription for a VPN service. This allows them to make a one-time payment and then use the VPN for as long as they wish to, at no extra cost.

With more people looking for ways to employ free VPN services on their devices, at first glance it would appear that lifetime deals allow users to save money and obtain a good deal.

Some providers have started offering lifetime VPNs alongside their regular plans, whereas others have recently removed this subscription option. There is a reason why lifetime VPNs have fallen out of favor with amazing services such as NordVPN. Whilst on the surface, it seems that you get lifetime access to a VPN, unlimited lifetime subscriptions can actually be a risky investment, as ‘lifetime’ may mean a different thing depending on the provider. 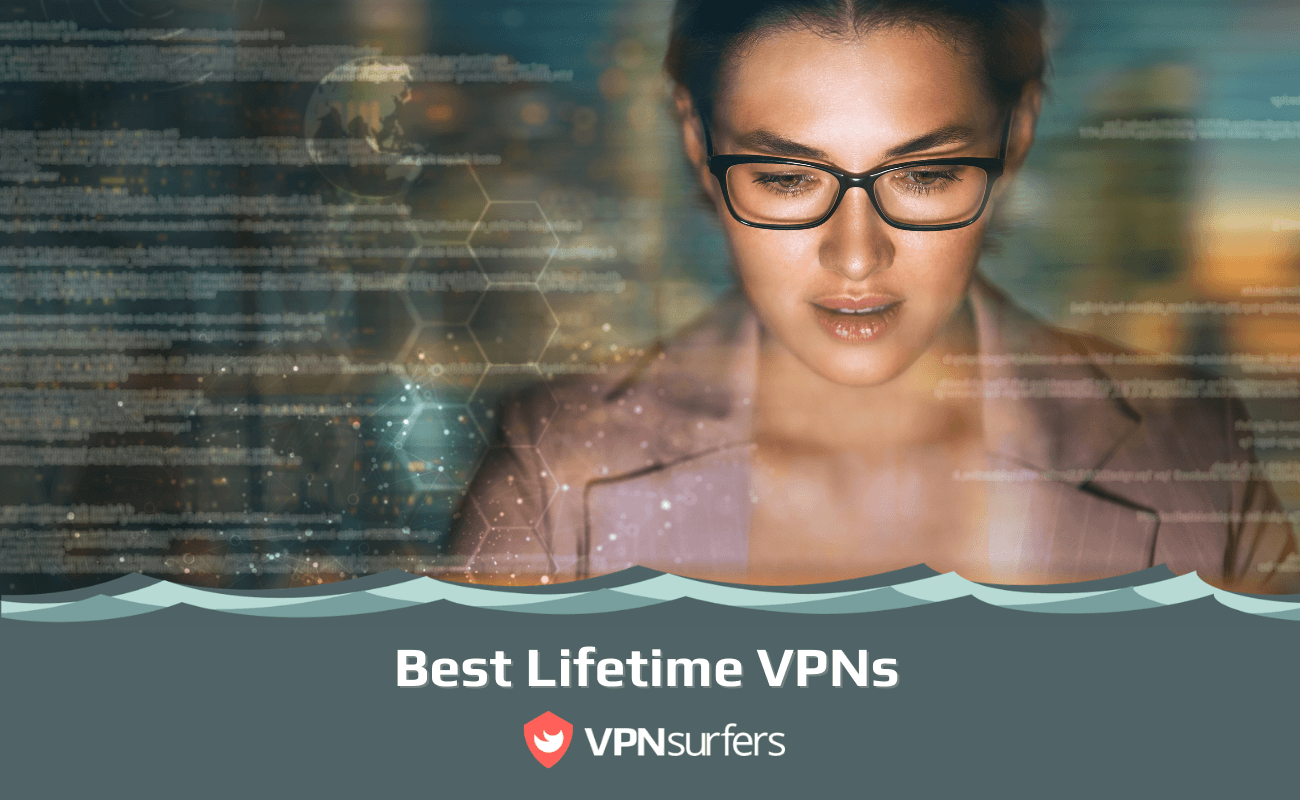 Is a Lifetime VPN Safe?

So, is investing in lifetime Virtual Private Networks a good idea? While purchasing a lifetime plan may seem like an attractive deal because it saves you a lot of money, in the long term, there are many reasons why you should avoid a lifetime subscription plan.

When you purchase a lifelong plan, it may not necessarily guarantee that you’ll have access to your provider’s VPN service for an unlimited amount of time. However, it’s worth reading the small print whenever you come across a deal that seems too good to be true, especially if purchasing from third-party resellers.

The lifetime subscription deal you buy, may in reality, only be valid for a few years and not your entire life. However, by agreeing to the Terms of Service upon payment, you accept that you may only have access to the service for a few years.

2. You don’t receive value for money in the long run

VPN services cost a lot to run. Companies need to make enough revenue to run server networks across many countries and provide their large user network with unlimited bandwidth. On top of this, technology is always advancing, which means a VPN provider needs to constantly update its software to ensure it offers the most advanced features.

If you buy a lifetime subscription from a VPN company, it is unlikely that you’re going to receive your money’s worth in terms of service. From a business sense, the provider may be unable to maintain its servers or update to new technology to protect subscribers’ online privacy and security.

Moreover, such services may employ weaker VPN protocols or lack military-grade encryption. It’s also unlikely that you’ll have access to VPN server coverage across the world with a lifetime subscription like you would with reputable VPN providers such as ExpressVPN. This means you may be unable to bypass geographic restrictions.

Lifetime deals also may come with limitations in terms of device support and connections. Unlike Surfshark VPN that offers unlimited simultaneous connections, a lifetime plan may not offer support for multiple devices.

Given that lifelong subscriptions don’t generate enough money for providers and that you are likely to receive subpar VPN services and features, we recommend avoiding these deals that seem too good to be true.

3. The company may shut down

So, what if you come across a lifelong deal, purchase it, and then a few days later find that the company has shut down? If the company has a no-refund policy, then you would be unable to get your money back, even if you were only using the service for a few days.

It’s worth reading the fine print before signing up to see what would happen to your money in this case since many lifetime services operate similarly to Ponzi schemes.

If you think this is an unlikely scenario, then it’s worth reading up on DissembleVPN. This provider offered a lifetime deal to customers and then soon after shut down completely, taking all of its subscribers’ money.

As mentioned earlier, providers need to sell subscriptions to generate a profit and keep up with running a VPN service. Most providers do this through their monthly or yearly subscription plans, but others earn money by selling user data.

While free VPNs are known to store and share browsing data, paid-for VPNs are less likely to do so, especially if they have a good no-logging policy. If you sign up for a lifetime VPN, then you cannot be certain that at some point in the future, the provider won’t amend its privacy policy and offer up customer data to third parties, including government agencies.

If you buy a regular VPN subscription, this allows you to opt out more easily if changes that could infringe on your privacy were to occur.

5. There is less customer support

Some of the best VPN services offer premium support to users, such as 24/7 live chats, detailed tutorials, and email and phone services. A VPN that offers its service in exchange for a reasonable price will also offer better customer service if you need support.

With a lifelong deal, you may have access to the features and a decent-sized network of servers, but it is unlikely that top-quality support is included in the sale as well.

Is a Free VPN Better Than a Lifetime VPN?

Although we recommend purchasing a premium VPN over using a free VPN, in some ways a free VPN service may be better than a lifetime VPN.

For one, you don’t need to hand over any money to use free VPNs. A free VPN offers flexibility as you can use the VPN for a month or two years, without needing to worry about getting a full refund if you stop using the service.

However, the best idea, if you want good VPN protection, is to use a paid-for service. A premium VPN offers access to military-grade encryption, support for a wide variety of devices, live chat support, a faster VPN connection, and other amazing services.

So, should you use a lifetime VPN? In our opinion, it isn't worth it. Instead, choose a long-term plan from a well-known provider such as NordVPN or Surfshark VPN.

Is a lifetime VPN a scam?

What does 'lifetime' mean for a VPN?

Lifetime VPN doesn't always mean you have a VPN service for life. There is usually a hidden condition, limiting the user's access to the VPN for a few years only.

How much does a lifetime VPN cost?

Lifetime VPN subscriptions vary from provider to provider. For example, the KeepSolid VPN Unlimited subscription ranges from around $200 to $300, which is quite a steep price.