If you’re using a VPN, it’s for one of two reasons. Either you’re looking for more privacy and security online, or you want the freedom to access geo-blocked websites that your school or employer blocks.

To use a foreign website, a VPN server in your country of choice is essential. Websites such as Netflix will look at your IP address’s country location and block you depending on whether you’re in the right territory or not. However, there may be times when you need a VPN server with a specific city location, such as New York.

With VPN servers in New York becoming more sought-after, providers are adding more VPN servers in this area to meet the demand. The best VPNs for New York are NordVPN, ExpressVPN, Private Internet Access, and Surfshark.

If you’re living in New York City and want to encrypt your internet data but still need a fast connection, a VPN in NYC is the best option. It will provide you with a fast connection yet still ensure your browsing is private.

Since New York City is one of the most important cities for business, people must have access to IP addresses and a VPN server located there. If your company’s headquarters are based in NYC, you can tap into its local network using a VPN more easily. Show more

Speed, server network, and bypassing geo-blocks. We’ve considered all of the most important aspects of a New York City VPN to create our list of the best New York VPNs.

NordVPN has a large server network with over 200 in New York alone. Offering both speed and security, NordVPN is the best VPN service for New York and our top choice.

If you’re based outside of the USA, NordVPN’s New York server options will provide you access to all your favorite US streaming sites with no issues. NordVPN uses obfuscated servers in New York, which can bypass streaming sites’ strong firewalls. These are special as they disguise the fact that they are VPNs.

If you’re based in New York, Nord’s VPN software can encrypt your internet traffic and ensure no third parties see what you’re doing, ensuring you stay anonymous online. Not only are NordVPN’s servers very secure, but they are ultra-fast, too, thanks to the NordLynx protocol. This is Nord’s very own open-source protocol that has been built around the new WireGuard protocol.

With AES-256 bit encryption, you can surf the internet with complete safety and anonymity. Should your New York server go down for any reason, NordVPN has a kill switch that will cut your internet connection. There is also a Double VPN tool that passes your VPN connection through two servers.

As well as this, Nord has multiple other server locations in the United States, so you can easily switch to one of these should you need to. However, since there are over 200 servers in New York, you’ll never run out of IP address options. Better yet, you can purchase a dedicated IP address in New York, so that you have your very-own New York IP address that only you have access to.

ExpressVPN has VPN servers in all major USA cities and gives internet users a safe and fast VPN internet experience.

If you’re looking for United States-based VPN servers to access US streaming services, then ExpressVPN is one of the best options. Our speed test results were impressive, suggesting that users would enjoy buffer-free streaming and a lightning-fast internet connection.

If you want to use a New York server to hide your online movements from your ISP (Internet Service Provider) and any other prying eyes, then you can do so with ExpressVPN. It has the highest data encryption and uses the strongest tunneling protocols, including OpenVPN and IKEv2.

ExpressVPN has a dedicated mobile app that means that you can connect to a New York VPN and enjoy the freedom and privacy it gives you regardless of where you are. ExpressVPN works across all major platforms, including iOS and Android, and the desktop and mobiles apps are easy to use and create a pleasant user experience.

Although ExpressVPN only has two New York-based servers on its network, which is a lot less than NordVPN, this still provides each user with access to many different IP addresses. It’s a guarantee that you’ll be able to hide your real IP address and visit your favorite website anonymously.

Private Internet Access (PIA) has the best server network if you’re looking for a United States-based IP address. With more than 100 servers in New York alone, PIA can ensure you have risk-free web sessions.

When it comes to security, PIA only provides the best. This VPN service employs military-grade encryption and has DNS leak protection that ensures your true location is not revealed. What’s more, PIA’s VPN software comes with built-in adware and malware protection so that you’ll never be at risk.

If your server connection dips, then PIA’s in-built kill switch will activate, cutting off your wi-fi connection. This guarantees that your traffic data is never exposed to any third parties.

By navigating the web under an IP address provided by one of the New York servers, you’ll be able to bypass geo-based restrictions and use the websites that are available to United States residents. From US Netflix to regional online newspapers, you’ll have access to all the geo-blocked information you want.

From the information on its website, Surfshark proclaims to have server locations in multiple countries. This enables users to get past regional restrictions in both New York and other global cities.

With servers located in many countries, Surfshark users can not only change their location to NYC but can surf the net using an IP address from a country far away. From accessing censored and geo-restricted sites to bypassing streaming restrictions, Surfshark is one of the best VPN providers.

Not only does Surfshark enable people to unblock websites and access US internet content, but it also offers all of its users incredible security, regardless of the server they are connected to. With first-rate encryption and protocols, users’ online activity is protected from the moment they connect to a VPN server.

What’s more, Surfshark offers a MultiHop connection option that allows users to create multiple connections through many countries. As well as this, you can opt to use the Camouflage mode, which hides the fact you’re using a VPN from your ISP.

Surfshark has simple-to-use VPN apps that allow users to choose from a list of servers. There is a dedicated app for both iOS and Android devices as well as Windows and macOS clients. 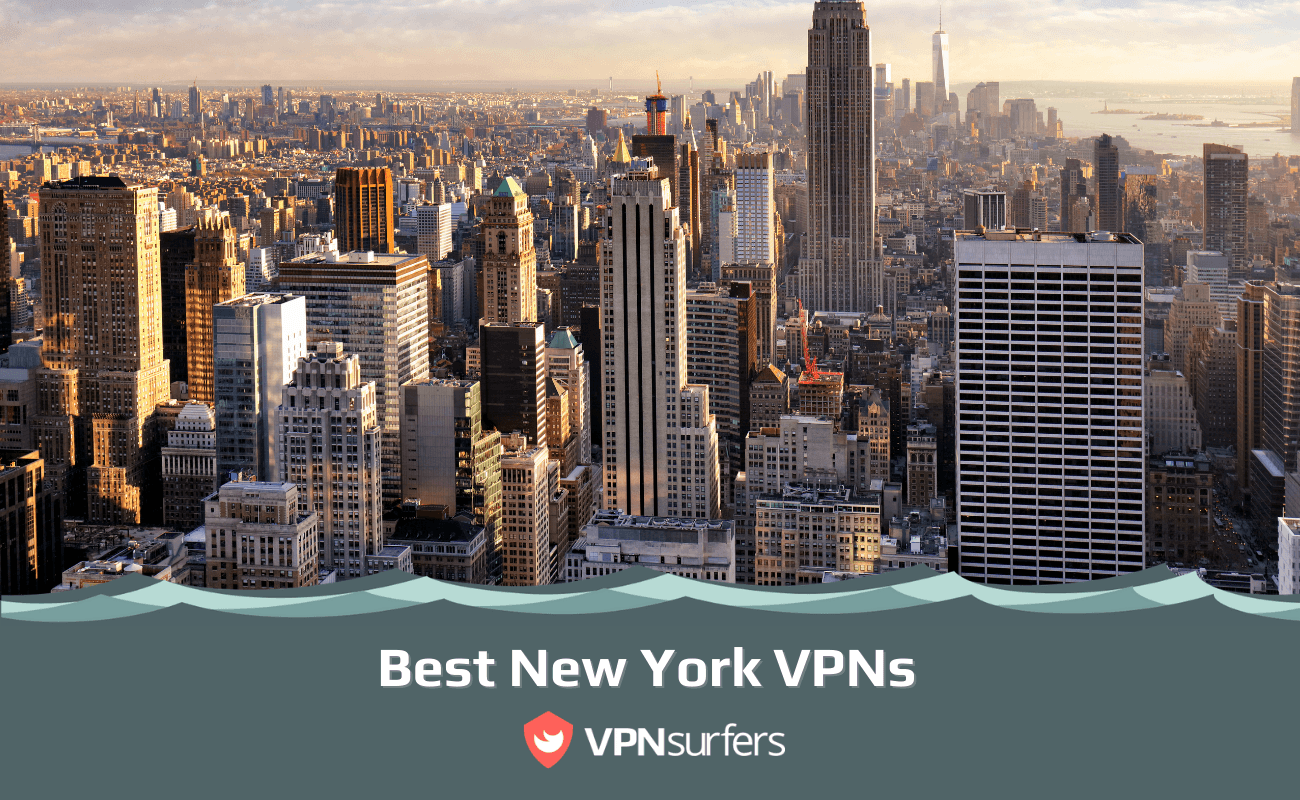 What is a VPN for New York and Why Do You Need One?

A VPN for New York is a Virtual Private Network with servers in New York City. Many VPN companies have VPN servers in the Big Apple because it’s one of the most popular US VPN server locations. So, why do people want a New York VPN server?

Should I Use a Free VPN in New York?

Free VPNs are in abundance, but the best VPNs for New York are paid-for. Here’s why:

Fortunately, there are a couple of great free VPNs for New York, one being ProtonVPN. ProtonVPN offers access to many free US servers, including some in New York City.

Are VPNs Legal in New York?

Yes, a VPN is legal including a VPN for New York. Assuming you only use the VPN to protect private information and enjoy more internet freedom and don’t use the VPN for anything unlawful, you will be fine.

What is the Fastest New York VPN Server?

If you are connecting to a New York VPN from outside the US, then you’ll want a fast server connection. NordVPN offers the fastest New York VPN server, and also uses its proprietary NordLynx tunneling protocol for even faster VPN connections. Moreover, NordVPN offers a selection of New York servers; so if one server has many users, you can simply switch servers to another one in New York and enjoy a faster connection.

How to Get a New York IP Address

A VPN offers the easiest way of getting a New York IP address. In a few quick steps, you can change your IP address to a New York one and access internet content that is only available in the Big Apple. So, here’s how you get a New York IP:

All of the VPN services on our list offer New York IP addresses but most VPNs provide VPN servers in New York since it is a popular location for users. For example, HideMyAss and TorGuard are two other popular VPNs that offer New York servers.

We’ve compared both HMA and TorGuard against NordVPN, the top-rated VPN on our list, but neither provider rivals the services that NordVPN offers.

What is Gotham City VPN?

A New York VPN is an excellent piece of cybersecurity software to have in your possession. You can access geo-restricted content in New York from anywhere with a New York IP address. Likewise, you can also use a New York VPN for more security online and to unblock geo-restricted content in other countries. However, since many VPNs offer New York server locations, it can be hard to separate the good services from the bad. You may come across malicious New York VPNs if you don't do your research; this is why we recommend using a VPN from our list above.